With Its Knockout Third Season, “The Legend of Korra” Takes the “Avatar” Franchise to Another Level 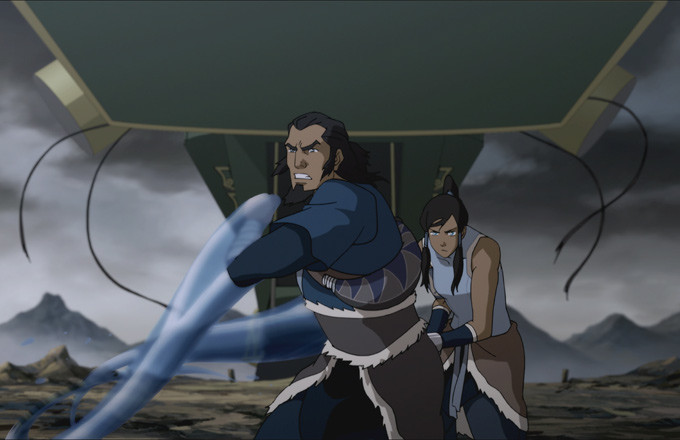 (Excerpt) In The Legend of Korra’s third season, the Avatar franchise has fully mastered the elements.

Finally, there’s some real fire. Avatar: The Legend of Korra’s latest season (which concludes today at 12:00 p.m. EST, on Nickelodeon) has been an astonishing accomplishment, sneaking up from a relatively slow beginning to become, in all likelihood, the Avatar franchise’s most consistently excellent run. That’s no small feat considering the exaltation of parent series The Last Airbender, which is rightly acclaimed as one of the greatest kids’ shows ever (it measures up well against most “adult” programming, too); beautifully animated, well-written, and painstakingly designed, The Last Airbender brought its unique yet familiar world of elemental “bending” to life over the course of three seasons and one epic story.
Korra had big shoes to fill, but with the culmination of Book Three, “Change,” Avatar has reached its full storytelling potential.

The fight sequences are astonishing, making creative use of bending abilities to finish off antagonists (I literally yelled “Boom!” at the screen when combustion-bender P’Li got hit with a suit of armor, causing her to explode her own head) and the full animation capacities of Studio Mir, who even manage to inject subtle levity into something as simple as several people sitting on a bison. A long, uninterrupted “shot” of Korra battling Zaheer through the air evokes a hundred aerial battles in superhero movies (and Aang’s climactic fight with Fire Lord Ozai), but far surpasses them in tension and sheer breathtaking power.