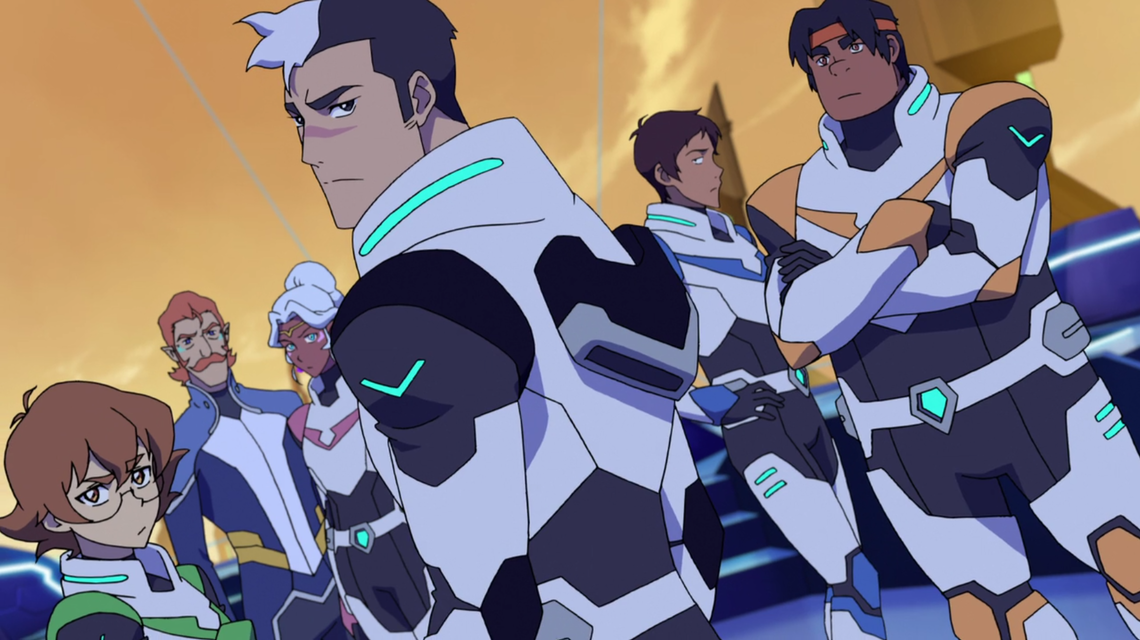 Season 4 of Voltron: Legendary Defender dropped on Netflix a little over two weeks ago, so we're pretty sure it's safe to drop all the spoilery goodness straight from the show's exec producers that we have below. But just in case ...

SPOILER ALERT: There are lots of details about the fourth season of Voltron, straight from showrunners Lauren Montgomery and Joaquim Dos Santos themselves, from here on out.

In Season 4, we see Zarkon return and wake up, loaded with quintessence, and realize what Prince Lotor has done and is driven with so much vitriol to destroy his son. How did you decide to take it to that level?

Joaquim Dos Santos: You make it sound way more brutal when you put it like that, buddy. [Laughs]

Lauren Montgomery: [Laughs] It's something that just came about because of Zarkon's personality. He's this weird, twisted, egotistical kind of guy. He's very intent on ruling his empire and getting his Black Lion back. When he's down for the count, Haggar brings in his son to take over, but once he gets back up he has every intention of taking his kingdom back. He's never going to let someone else rule it.

When Zarkon found out what Lotor was doing was stuff that could jeopardize his empire, he was not going to stand for that. He's ultimately going to treat his son like he would any other traitor. They're all going to get treated the same. You would think he would have some empathy for his own child, but that's not Zarkon. He has no attachment. He's been so tainted by this quintessence that he has no love for anything other than his obsession with the Black Lion.

JDS: It's that descent into base survival. It's that constant exposure to the quintessence just stripping away any good he ever had, which we were lucky enough to see in that flashback episode, "The Legend Begins," at the end of Season 3.

Lotor likes to go against the grain. He leads a group of female generals, which is an interesting dynamic. He feels like he's influenced by a real-life military figure who went against common strategy.

JDS: Yeah, it's not too far off from what you're saying. The main thing with Lotor as a character is that he's complicated; with Zarkon, we reverse-engineered some character complications, some character beats into him and his storyline. When we started off with the series, Zarkon was very much the Big Bad of the series. With Lotor, we wanted to make sure he had depth and an element of relatability and a sense of honor even though he was raised in this system that was corrupt and unforgiving, He's a product of his environment. For us, that added an exciting element to his character, but I think it's going to throw a huge wrench into a lot of people's plans in the story moving forward.

Let's talk about creating Lotor's female generals: Narti, Ezor, Zethrid, and Acxa. They stood out both visually and in personality. They're villains, but you could still root for them, no?

LM: We knew we wanted to bring in new, unique, and fun-lookingcharacters. We had done so much with the Galra. They're all of a very similar personality. Large. Strong. Usually purple. [Laughs] They mostly had one goal, and that's to serve Zarkon, so we wanted to change it up. It's an interesting thing, because it winds up working its way into the story beautifully, but I think it just came from a place of wanting to make them visually interesting, making them half-Galra (like Lotor) instead of full-Galra. That allowed us to get unique looks to the characters, which then influenced their function on the team.

We also wanted them to be memorable. We didn't want four characters to have all of the same personality. We wanted to show that Lotor was willing to work with different kinds of people. They didn't all have to be mindless drones who live to serve him. They can think for themselves, but ultimately he expects them to work with him, because he respects them and values their opinion, versus keeping them under his thumb in fear constantly.

JDS: Laura, you might remember better, but was the story element that Lotor thinks outside the box and was willing to work with half-breeds came first, or it was the visuals that came first, then as a result they became half-breeds?

LM: It's interesting, because I think our idea of them being half-breeds came first, because that influenced the visual. It originated from a place of them being female was the initial thing. We had such a large male force for Zarkon. Where are all the female Galra? It started out with a much bigger idea, with Lotor having a much bigger army, and then for production sake we could keep it cleaner and focused on the characters more if we made it a smaller crew, like a little sniper team.

JDS: And that helped us create a good analogue for team Voltron to have counterparts on Lotor's side.

From a design standpoint, there were these beautiful aspherical, asymmetrical planetary shapes for Diabazaal, Thayserix, Puig, and Olkarion that you just don't see anywhere. Where did you come up with the various visual planet designs?

JDS: We're lucky to have amazing artists and designers. You start with what occurs in science, but we also wanted something striking, and we wanted to create elements unique to Voltron. We started to push the (design) team to think about other shapes and geospheres that could be happening on these planets. We referringly called planet Puig as the "apple core" planet because it looked like someone around the outside of an apple. The planet that has nothing but space moose or caribou on it, of course has to have antlers! The design team knocked it out of the park.

LM: One of the fun things we always try to do on this show is change it up a bit, whether it's the shape of the planets, even as something as far back as the first season, where we have the Balmera, which is a living planet. Its habitants are these large rock people, but they have sweet innocent voices. They don't use their physical strength as aggression. We try to look at everything from a different angle. Normally we know in nature that planets are spheres, but we have that ability to break that mold and make things more interesting.

What about the action choreography in Season 4? That seems to have gone up another level too, especially the space battles. How difficult or complex was it to those sequences?

LM: Those were a headache. [Laughs]

JDS: [Laughs] Once again, we were incredibly lucky to have a talented crew of storyboard artists and animators that are able to bring those realizations to life. From a story perspective we just knew we had to evolve those battles. We couldn't fall into that same pitfall where it was Voltron and Robeast every week. We needed to make sure every battle felt unique and memorable in their own right. Some of them were massive, fleets and fleets of ships, it was a huge task.

Moving to Pidge and Matt, who were finally reunited. Now that she has Matt back in her life, as the only one with family present, what changes does Matt bring to the Team Voltron dynamic?

LM: Matt was able to link Voltron and that rebel coalition organization. By Pidge finding him, that gave us the ability to bring him in and set up that huge battle at the end of the season where you see Voltron working alongside the rebels, and the Keith factor working with the Blade of Marmora resistance fighters, and calling in their old allies. Other than being Pidge's family, I think Pidge herself is able to dedicate herself to Voltron now, whereas her focus was being pulled into a few different directions before. She's achieved part of her mission in finding her brother, but her dad is still out there, so she's still looking for him. She's got a little bit of relaxation now. Going forward, they're still going to be working together, fighting this fight. I don't think either of them have any intention of going back without knowing where their father is.

JDS: She's got an ally now. I think it's important to note that Matt knows a side of Pidge that the team doesn't even know. He understands her on a different level, and it is an interesting element to their dynamic. We've got a finite number of episodes where we could pepper all of these storylines, but their relationship alone could be expanded upon in graphic novels and comic books.

Which writer on the team is a big fan of Tokusatsu (Japanese live action/drama) like Power Rangers and Ultraman? The episode "The Voltron Show" was a nod to that subgenre.

JDS: More than the writing, that episode was written as a stage show or Voltron on Ice. It was our storyboard team and direction team (Steve Ahn, Eugene Lee, Chris Palmer); we have to give the nod to those folks for working those elements in there.

LM: I think some of the vocal direction we gave them was to look at some of the cheese of the Power Rangers striking the pose, and I think they literally just googled it and said, there you go!

JDS: Maybe we brought it up in the writers' room briefly, but it was more about Coran getting the team riled up, being that agent, versus referencing these series specifically. "Strike a pose on stage!"

In contrast with Lotor there's this journey that Keith takes. First in questioning his leadership skills, then eventually finding his own path with the Blade or Marmora. How did you come to this solution for the Keith-Shiro two paladins, one black lion dilemma?

JDS: That definitely is a corner you potentially run into with both Keith and Shiro on the team. They definitely fill that space of being the paladin of the black lion similarly. I think we did something really unique, but beyond Keith finding something real ambitious, he was able to further explore who he is and the mystery of where he came from. Who would've guessed when we would be continuing our Voltron series that the guy who used to be the leader of the original version would end up leading our team and was half-Galra and he had this whole element of him that had yet to be explored? I think we're super excited that 1) people have embraced it and 2) the storyline feels natural for Keith. It feels like a decision that he would make.