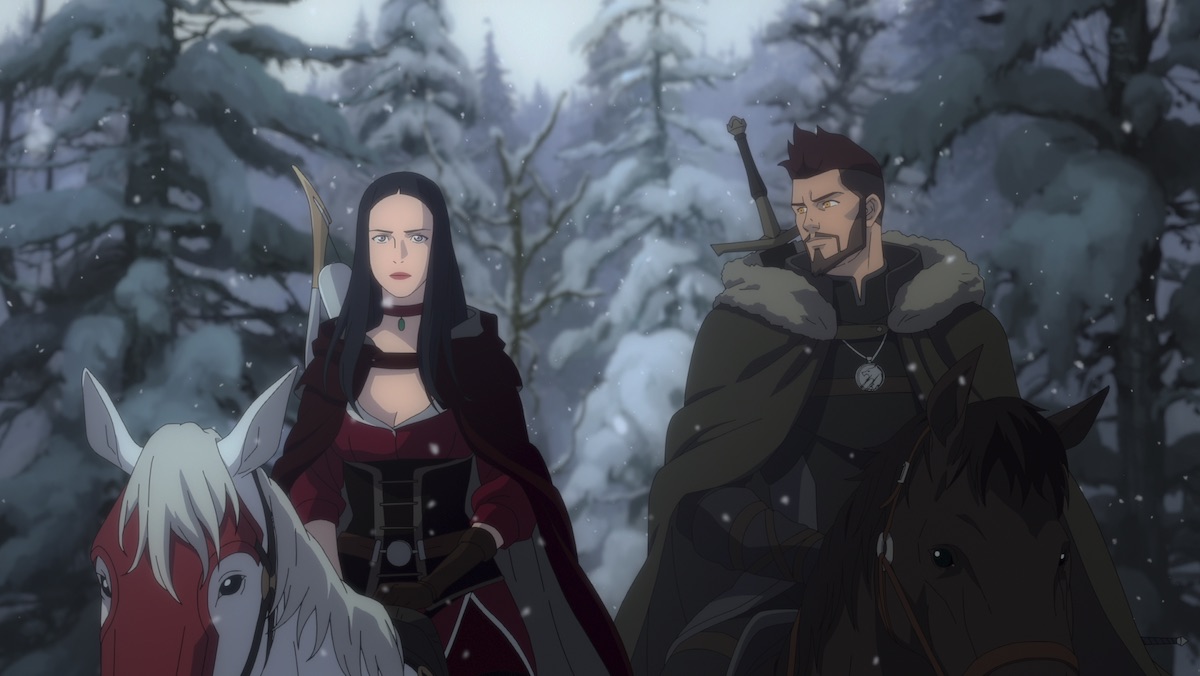 Netflix’s new prequel anime film The Witcher: Nightmare of the Wolf tries to do so much it shouldn’t work. It provides significant history about the Continent and its magical users, namely mages and witchers, filling in many of the holes the live-action show’s first season didn’t fully address. It also serves as an origin story for a character joining the series in season two, Vesemir, the witcher who trained Geralt. The witcher home of Kaer Morhen also gets to shine ahead of its introduction on the show. The movie is also full of so many terrifying monsters it doubles as a living encyclopedia of ghastly beasts. And it does all of this while telling a personal story that spans decades, as well as a much larger story with ramifications that will last even longer. It’s a lot. And it probably shouldn’t work, but it does.

Somehow the film does all of those things while still telling a coherent, well-paced, entertaining, and moving story. One that is certainly a must-watch for fans of the show. And a great introduction for those thinking about watching.

The Witcher: Nightmare of the Wolf is not for the feint of heart. The Continent is a dangerous world of monsters. If not for witchers, it would be a world full of monsters, shredded limbs, and blood. A lot of blood. In some significant ways it does an even better job than the show of showing why witchers are so important—and so feared—in this world. It’s a crash course in this universe’s lore and every day life. Giving new context for who witchers are, where they come from, and what they do. The movie also explores the group’s less than stellar past. Not everyone who walked the path of a witcher had the same morals as Geralt. Not all of his older brothers were as grumpy as him, though. Vesemir most of all.

The film’s main character is nothing the like groaning, angry witcher who leads Netflix’s show. While just as handsome as Geralt, Vesemir is inherently charming and gregarious. He’s also far more selfish than his famous student. Viewers will often find themselves liking him in spite of him. Forget being a great and noble hero. He might not even be a very good person, though his skills as a witcher are more than formidable.

But he’s not the only magical being with impressive talents. Tetra Gilcrest, a powerful sorceress who distrust witchers entirely, is a worthy adversary. Monsters roam all over the Continent. Often in unexpected forms. Tetra wants to protect the land from all of them. Like Vesemir, there’s more to her story that gets revealed throughout the film. And the more you learn about her the more interesting both she and everyone around her becomes.

The same is true of the movie’s other main characters, as numerous threads come together for a poignant and exciting end. One that is far more epic and important to the franchise than the kind of conclusion it seems like the film is initially building towards. From Lady Zerbst, an elderly noblewoman who defends witchers, to Deglan, the witcher who recruited and trained Vesemir, everyone has more going on than they initially let on. When they do show all their cards—either because they want to or because they’re forced too—the entire film goes from being a fun exploration of this world to a major installment. That’s why even though the first third of the film feels a little disjointed initially, it all comes together in a satisfying way.

The Witcher: Nightmare of the Wolf boasts a great score. (No surprise for this franchise.) The animation is vibrant, especially during action sequences when it really excels. And its main characters are complex and interesting. Fans of Netflix’s series won’t want to miss it. And they’ll be able to recommend it to their Witcher-curious friends considering watching the show. At a tidy 81 minutes it’s not a timely investment, especially compared to the ten-episode first season.

But it really works because it does so many things well. It’s more than just a supplemental piece to the show. It has something to say about this world and the people who live in it—what they want from life and from themselves. And how we often create the monsters we fear the most. The question isn’t whether you should watch it. The question is when is Netflix going to make more The Witcher anime films.

The Witcher: Nightmare of the Wolf comes to Netflix August 23.