‘The Witcher: Nightmare of the Wolf’ Is Essential Viewing for ‘Witcher’ Fans 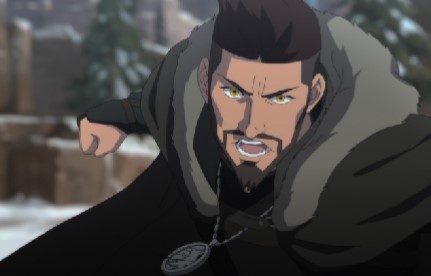 When a network announces a spinoff movie — especially an animated one — you’d be forgiven for not considering it required viewing. Projects like this are typically one-and-done deals. You get a new chapter with a fan favorite hero where they defeat a big, new enemy that ultimately doesn’t matter, and then move on to the actual story. The Witcher: Nightmare of the Wolf bucks that trend almost entirely. Not only does Netflix’s new anime-inspired movie give a satisfying backstory for Geralt’s long-beloved mentor, Vesemir, but in the process it also expands this universe, clearly defining the tolls of being a witcher while also justifying Geralt’s calloused view of the world. It’s the rare spinoff that makes every detail of its universe feel richer.

When we first meet Geralt in any iteration of this story, he comes from the same place. Geralt is always grizzled and world-weary, a reflection of his nearly 100 years on The Continent. That’s not the sort of witcher we’re introduced to through Nightmare of the Wolf‘s protagonist. Vesemir (Theo James) instantly feels as reckless and arrogant as any young man with too much power. When he completes a job, his success is defined by smug smirks and rowdy nights spent drinking and partying with his fellow witchers — a far cry from Geralt’s silent brooding. Through Vesemir’s eyes the movie shows what a witcher is supposed to be: a monster killer who makes the lives of everyday people a little easier. He’s like a monster-slaying lawyer. Sure, he’s going to cost you, but when you need a witcher, that price tag become irrelevant.

Aside from Andrzej Sapkowski’s novels, Nightmare of the Wolf also offers the most comprehensive look into what it takes to become this specialized killer. Flashback after flashback tells the sad truth of Vesemir’s life, an unwanted child claimed by the Law of Surprise who was forced to watch his orphaned friends die at the hands of the Kaer Morhen’s many tests. The trials and debilitating potions required to turn a man into a witcher have been mentioned in passing before. But Nightmare of the Wolf is the first property to truly dive into emotional toll this process takes, showing scarring scene after scene that’s reminiscent of Yennefer’s (Anya Chalotra) transformation into a sorceress. When the cost of power is the loss of almost everyone you’ve ever care about, what is the point?

The answer, Nightmare of the Wolf argues, is the nobility of this profession, the chance to save the hunted. But even that is called into question in this movie’s universe-altering climax. Without revealing any spoilers, Nightmare of the Wolf fully dives into the assault on Kaer Morhen in the 12th century through the sorceress Tetra (Lara Pulver) and the mysterious Lady Zerbst (Mary McDonnell). This often acknowledged but barely explained battle between men, sorcerers, and witchers led to the extermination of most witchers as well as the witcher creation process. It’s the event that directly established Geralt and his brothers as possibly the last of their kind. Fans have long known that this battle happened because men turned on witchers. Director Kwang Il Han and writer Beau DeMayo’s film explains why that shift happened, and by its end it’s hard not to at least understand their hostile motivations.

Though he starts out his saga roughly the same age as Geralt in The Witcher, Vesemir’s story is one of growing up. It’s about disillusionment and one man realizing that his idols and life’s work are filthier and more corrupt than the monsters he hunts. More than its concise explanations about how witchers are created, the battle of Kaer Morhen, or the Law of Surprise, its this reframing that makes Nightmare of the Wolf essential. As we tee up for The Witcher Season 2, we have a more complete understanding of the loving grandfather figure Kim Bodnia will be portraying in this twisted world. We understand his scars just as well as we understand the root of his surprising gentleness as he embraces Ciri as a new addition to his found family.

Geralt is one of the few children who lived through the siege of Kaer Morhen, witnessed the deaths of his mentors, and saw firsthand what sort of horrors his profession could cause. These truly traumatizing events clearly influenced Vesemir as a mentor and Geralt as a person. Netflix’s film shows rather than tells that Geralt’s stoicism has never been rooted in apathy. Rather, it’s shame and a fear of that keeps our gruff hero permanently on the fence as The Continent battles around him. That restructuring makes the generation-changing decisions Geralt has to make on Ciri’s behalf feel all the more dire.

The Witcher: Nightmare of the Wolf premieres on Netflix Monday, August 23 at 3/2c a.m.

'The Witcher: Nightmare of the Wolf' on Netflix: Review (decider.com)