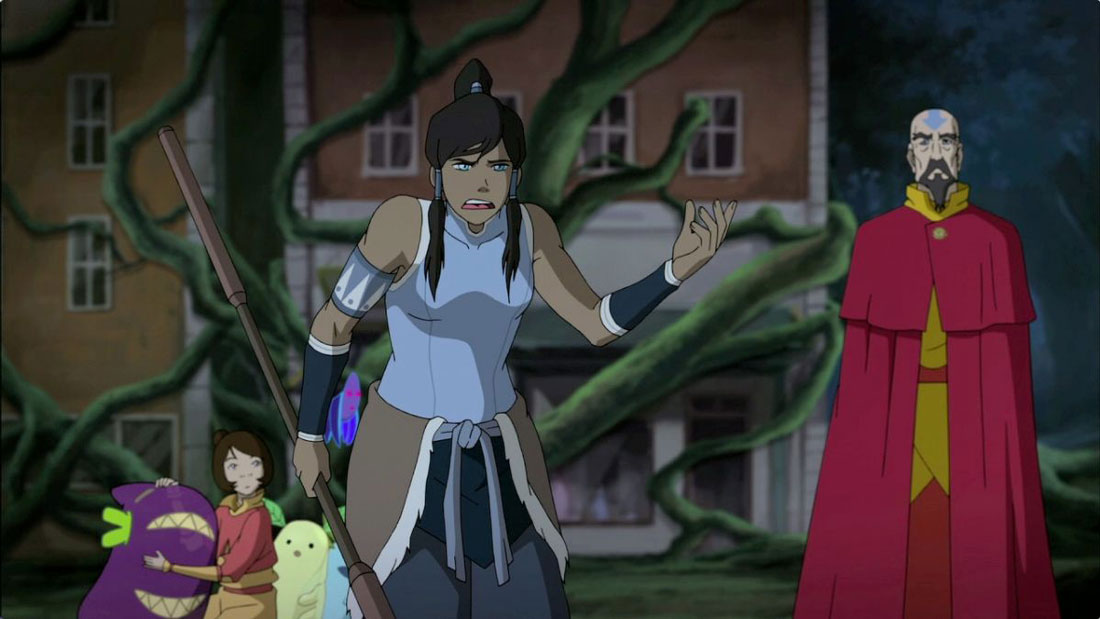 The Legend of Korra : “A Breath Of Fresh Air”/ “Rebirth”/ “The Earth Queen”

Avatar: The Last Airbender and The Legend Of Korra have a passionate adult audience, but first and foremost, these shows are targeted for an audience under the age of 18. They are fanciful children’s tales about young people with extraordinary abilities learning to survive in a world of warring nations and mystical creatures, but they contain truth within the myth. Like all great children’s shows, Avatar and Korra use metaphors to guide viewers through their own life experiences, teaching valuable lessons that can be applied in a world where people can’t bend the elements to their will.

Book Three is titled “Change,” and the first thing it does is show the major new development following Korra’s actions. While running around with his adorable pet Bum-Ju, Tenzin’s brother Bumi falls from a tree and discovers that he’s now an airbender; he’s just one of many, and the season opener, “A Breath Of Fresh Air”, looks at how these new airbenders are impacting Republic City. In addition to new benders, Republic City also has to deal with entire neighborhoods getting consumed by vines from the spirit world, forcing humans from their homes so that spirits can populate the area. Ladies and gentlemen, welcome to urban migration, Korrastyle.

The second episode, “Rebirth,” looks at the challenges the group faces in their recruitment drive, emphasizing comedy to highlight how silly Korra and Tenzin’s strategies are. Tenzin thinks that people will feel a spiritual obligation to join the Air Nation despite its restrictive lifestyle, and it’s no surprise that new airbenders are unwilling to give up their current lives to join some bald man’s new nation. His dinner with a man who is rightfully reluctant to leave behind his farm and family goes almost as bad as Korra’s recruitment of a 22-year-old slacker, showing that Korra’s more aggressive strategy is just as uninviting as Tenzin’s. Jon Hader and Maria Bamford do hilarious work as the voices of slacker Ryu and his mother, and those moments of humor are a big part of Korra’s charm.

When it comes to The Legend Of Korra, the things I’m looking for are spectacular action sequences, imaginative designs, smooth animation, and stories that balance character drama with larger social issues. Visually, these three episodes are some of Korra’s most impressive chapters, with Studio Mir bringing the events to the screen with impeccable detail. (And they’ll be doing it all season!) Melchior Zwyer joins the directing team after doing some outstanding work on Young Justice, and he’s a welcome addition to the series, bringing an appropriately large sense of scope to the first episode. That scope is a major component of the action sequences, and Zwyer, along with directors Colin Heck (“Rebirth”) and Ian Graham (“The Earth Queen”), does excellent work spotlighting the environments to show how the characters utilize their surroundings in a fight.

The prison breakouts are the action highlights of these three episodes, quickly establishing Zaheer and his companions as major threats by showing their remarkable bending ability. Zaheer and firebender Ghazan have some sweet moves, but they pale in comparison to armless waterbender Ming-Hua, who gives herself two water appendages to wipe out her enemies. They’re scary enough that they demand the attention of Lord Zuko (gruffly voiced by Bruce Davison), who gets an awesome introduction at the end of the second episode when he rides off on his giant red dragon to fight Zaheer and his pals.

We don’t get the chance to see Zuko in action—he spends the third episode going to the Northern Water Tribe, where he shows Eska and Desna their secret ice prison—but I anticipate one hell of a brawl, especially with Studio Mir animating the entire season. With the visuals and the plot back on track, Book Three is the Change that The Legend Of Korra needed, and I’m very excited to see what other surprises are in store.