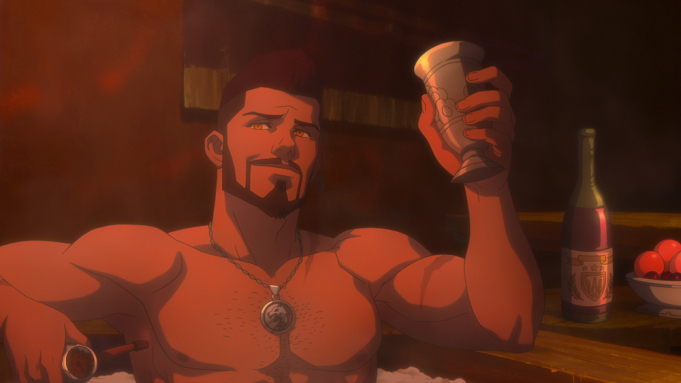 “Witchers are rogues without virtues, true diaboloical creations worth only for killing. There is no place amidst honest men for them…” And so begins the teaser trailer for Netflix’s The Witcher: Nightmare of the Wolf. Netflix also revealed the voice cast for the anime origin story. The Divergent Series star Theo James voices Vesemir, Lara Pulver is Tetra, Graham McTavish is Deglan and Mary McDonnell is Lady Zerbst. You can see character photos below.

Per the logline: The world of The Witcher expands in the anime origin story: Before Geralt, there was his mentor Vesemir — a swashbuckling young witcher who escaped a life of poverty to slay monsters for coin. But when a strange new monster begins terrorizing a politically fraught kingdom, Vesemir finds himself on a frightening adventure that forces him to confront the demons of his past.

The Witcher: Nightmare of the Wolf is written and produced by Beau DeMayo and co-produced by The Witcher Showrunner and Executive Producer Lauren Schmidt Hissrich and Studio Mir’s Kwang Il Han who is also directing.

The Witcher: Nightmare of the Wolf premieres worldwide on August 23 on Netflix.